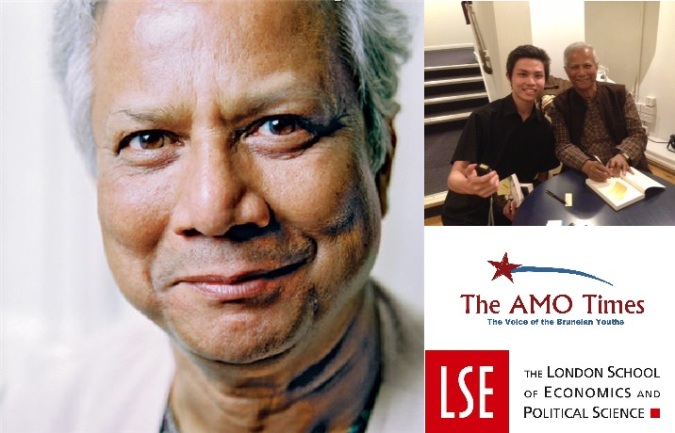 Muhammad Yunus gave a speech yesterday in London School of Economics and Political Science on the topic of social enterprise. Under the topic “Banker to the Poor: Lifting Millions Out of Poverty through Social Business”, he captivated the audience with his stories and metaphors that revolve around his quest to solve world poverty. From the humble beginning as a lecturer to worldly renowned banker, economist and Nobel Peace Prize Laureate this is the story worth telling.

His quest began a few decades ago, on a time not long after Bangladesh’s independence. Teaching in an Vanderbilt University then he heard of horrible stories of famine and poverty befallen into his nation. Only after he went back to see for himself did he saw the reality in the ground, people looking like skeletons and people dying of hunger in the streets every single day. “I was shaken to the core” he recounted.

In a trip around his hometown he pondered on a solution set about to eradicate the problems he saw. Thus came about an idea to lend money to the poor to help them start their own business, albeit in a small amount of about USD$2 or lesser. “It was nothing mathematical or formulaic at all. Nothing of that kind that I taught back in Vanderbilt. It was a very simple idea.”

And it worked with great wonders. Clients, which mainly composed of women paid their dues on time and rate of default was almost less than 1%. His venture grew to extend to other hometowns and communities, and along with it the lifting of poverty among its citizens. He had found his calling and now he wants to scale.

Setting about to enhance the social mission, he presented the micro-financing business model to.Bangladeshi banks hoping they too would implement such measures. He was flatly rejected. “Who wants to borrow money to the poor?” a banker commented “They can’t pay. This is an unnecessary risk for our depositors money!”

Muhammad Yunus persisted and called about his successful experience earlier on but without avail. “We argued for over six months. All the while I began to see how the system works. Banks are supposedly used to lend money to the people, regardless if they are poor or rich. However the system is very strange. Instead of lending money to those who do not have money they lend it had excess of it.” a roar of laughter swept across the LSE hall.

The moment of truth finally came when he wagered his own money in the line to open up a line of credit to the banks. “I told the bankers that I am willing to turn this into a business and if for any reason fails, then I shall pay everything from my own pockets”

As years passed his venture grew by leaps and bounds. Until finally the Grameen bank was created, acting as a formal institution. One which reflects his mission of lifting millions out of poverty. And so his initial story that led his to be the person who he is today.

As his venture flourished, he extended its social mission to encouraging young and unfortunate Bangladeshi children to get a formal education. He worried how the existing system would hinder them from tapping their creative potential, and worst comes to worst is the thought of them absorbed into the cycle of poverty yet again. When he proposed of such matters, hs clients-mostly Mothers-naturally follow. Within short period of time countless children attained basic school qualification.

“Surprisingly enough, more and more youths continued in their education. Many went to secondary schools, college, university and so forth. But here we met another problem: educational financing.” It is a problem that exists everywhere, talented children who could not afford higher education were forced to stop, a rather sad thing to think about.

“But here we marshaled to solve it by providing the financing. It worked to great effect. A large number of young generations follow suit.” By giving them the right education they were able to find more and better opportunities.

“However it led yet to another problem: Unemployment. Many young people go to me and ask why encourage them to go take the education when there are no one to employ them” After careful thought of the situation he finally came up with a wise advise: “Do not be a job seeker. Be a job giver.”

“Set up your own business and employ others.” They replied that they do not know anything about business. They took engineering, chemistry, medicine and even business but knew little or nothing about real-life business at all. Universities and Higher education units equip the students on how to create a CV or resume but nothing about such matters.

He looked them into the eye “Look at your mum, when she started out she does not know anything about business. Taking a loan in Grameen bank was one of the most terrifying thing she has ever had. She had countless nights before deciding to take it. When she did she worked hard and well to pay her dues every week. Now before you look to ask others about setting up a business, look at mother. She has 20+ years of experience since she began her quest. You have a business consultant at home. Learn from her. And think of it: who has a better chance at this very time right now, you or your illiterate mother?”

“Man has always wanted to go to the moon. This romance goes all the way back to the ancient times. Knowing its scientific impossibility then, the dreamers wrapped their long hopes and aspirations into fiction stories worth telling. This is how science and fiction meet. This is how the likes of Star Wars and Star Trek were born. But as times passed stories like these take a magical life on its own. It became a guiding path for future inventions and accomplishments. Needless to say without the storytellers we may not posses the technology which we have today”

“But you know what is strange? Men has never dreamt of zero poverty. It is really hard to imagine such an environment.” Muhammad Yunus then proceed to tell how his science fiction would be like for poverty: To be extinct like the “dinosaurs”. “Yes, I want the ‘dinosaurs{poverty}’ to be put into a museum where everyone asks ‘What does poverty mean? How did it exist in this planet in the first place?’” Then he proceed to challenge the audience “I invite those to dream of such dreams. Let it be a guiding path to achieve the goals worth fulfilling for”

Reflecting back on his speech, I thought to myself that this is truly a remarkable man. He is solving a problem through the power of social enterprise. Currently he runs sixty companies, while attracting partnerships with the likes of Bill Gates and national Governments such as Haiti and Brazil. He is the epitome of the quote I hold very dearly “Seeth the man diligent in his business. He shall stand among kings” 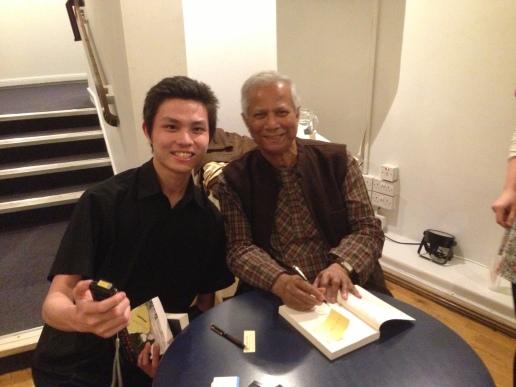 I also manage to take a picture with him and have his book “Banker to the Poor” signed. I was so happy! Never once did I thought of meeting him in person before I think God has his ways. As of the message which I like to send out to those reading my words-particularly the Bruneians outside Brunei, seize as much opportunity as possible!

Go out and expose yourselves to these kinds of things. Do not wait for somebody else to take the initiative for you. Afterall the rewards is all yours for the taking. And because really in order to develop the nations effectively should we Bruneians not work hard to develop ourselves first? So I highly encourage everyone to go outside their ‘bubble’ and Carpe the Diem out of the countries where you study.

As of those back in the country, the opportunity is closer than you think. You have Toastmasters Brunei, I-Centre(center for tech entrepreneurship), Green Brunei’s Natures Avengers, Livewire Shell’s Bright Ideas, and Entrepreneurship @ Campus to help you get started. This is where I started(except the entrepreneurship @ campus and Green Brunei) and prepared for my journey beforehand, so I recommend you to take a brief visit and learn from the communities there.

(Disclaimer: The speech written is not exactly verbatim)

One thought on “Banker to the Poor: Lifting Millions Out of Poverty through Social Business #LSEYunus”